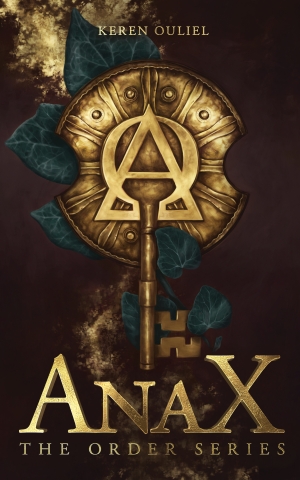 Walking a fine line between conspiracy theories and the unimaginable truth, a young environmental journalist, Naya Tellus, investigates unexplained natural disasters.
Stepping onto a path of secret societies, mythical creatures and fate, she discovers the truth about herself and her place in the world she would never have believed existed.

What is the connection between Naya and the higher force that sets everything in motion? Who can she trust? And what
if the reality is more unbelievable than any fiction?

Anax, the first book in The Order series, is your key to mystery, fantasy and myth. Will you accept your destiny?
“Don’t you think that if something like that was true, everyone would have known it by now?”

Joshua taps his fingers against the mug, seemingly somewhat impatient yet curious.
“Well, your world leaders do not care about anything that does not involve money.”

Naya scoffs. “My world leaders? Need I remind you that we live on the same planet?”

The man straightens himself, takes a twenty pound note out of his blazer pocket and stands up, handing it to her rather than putting it on the table. Naya doesn’t miss the fact that he hadn’t touched his food or drank his tea.

“We may live on the same planet, but that does not mean we live in the same world. My world, Miss Tellus, has its own rules.”